10 Types of Medication to Avoid during Pregnancy 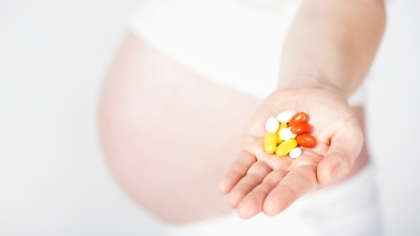 If you are expecting, you are probably confused about which medications to avoid during pregnancy. The general rule of thumb is to avoid all over-the-counter medications during the first 8 weeks of pregnancy, because during that time, the baby's heart, lungs, and brain are formed. As the fetus grows and matures, the list of medications you can safely take gets a little longer. However, there are 10 types of medications you should absolutely avoid throughout your pregnancy, as they could harm the fetus at any stage of development.

Most antihistamines should be avoided. If you are suffering from allergies, you should try to avoid your allergy triggers as much as possible. Try kicking your housekeeping routine up a notch: run the air conditioner, use a steam cleaner, change out all your filters, keep your shoes outside, etc.

A stuffy nose is a classic side-effect of pregnancy, but most nasal decongestants are not safe. You might try a neti pot, which uses warm salt water to clean your sinuses and combat congestion.

If you are suffering from headaches during pregnancy, most painkillers such as aspirin, acetaminophen, and ibuprofen are off-limits. Seek alternative therapies, such as reflexology or massage.

Most prescription acne medications, such as Accutane and Retin-A, are not safe to use during pregnancy. As your hormones adjust, you may find your skin clearing naturally.

If you require a cycle of antibiotics during your pregnancy, your doctor will choose one that is safe. Tetracycline and Streptomycin are not OK to use.

Generally speaking, all tranquilizers such as Librium and Valium, are not safe for use during pregnancy.

Some anticonvulsants are not safe to take, such as Diazepam or Clonazepam. If you need anticonvulsants, work with your doctor to find a prescription that has been cleared for use by pregnant women.

Antidepressants that have MAO inhibitors, such as Isocarboazid or Phenelzine, are not safe to use when pregnant. It's not uncommon to experience depression during pregnancy, so if you are in need of an antidepressant, your doctor will find one that is safe to use.

While herbs may seem like natural, safe alternatives to OTC or prescription drugs, they can be just as dangerous to pregnant women and the developing fetus. You should treat herbs just as you would any other drug and verify that they are safe before using. Some common herbs that you should avoid during pregnancy include:

The best course of action is to find non-invasive therapies to calm your aches and pains during pregnancy, such as massage therapy, meditation, yoga, gentle exercise, acupressure and reflexology. If you require medication, research the drug thoroughly and talk to your doctor before taking anything. A little precaution will save a lot of worry for yourself and your baby.