5 Dos and Don'ts for WAHMs With Growing Families

Whether you try one or all of these five techniques for coping with your growing family and at-home business, you'll find that it will take a bit of discipline to get your schedule back under control. 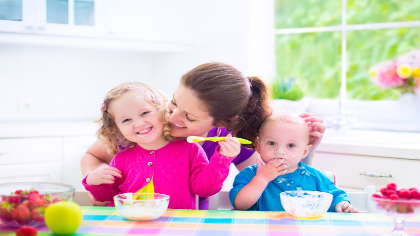 Just when I thought I had the perfect work-at-home routine, those two pink lines announced that I was no longer just the mom of a toddler. Beginning with the morning sickness, becoming a mom of two changed my predictable work schedule like a traffic jam on a road trip. While having both a two-year-old and a two-month-old in no way makes me an expert on parenting two kids, I have learned a few things, some of them the hard way, in my first few weeks working at home with both a toddler and a newborn. Here are a few of the dos and don'ts I've discovered for working at home with two children.

With my first, I thought multitasking was eating while holding a baby. Now, I'm nursing a baby while putting a thirty pound toddler in his crib and brainstorming ideas for my next writing project. Multitasking is an essential skill that grows in importance with the number of kids you have. What simple work-related tasks can you do while also accomplishing a simple mom task? Make phone calls while feeding the baby. Check email while giving the toddler the chance complete basic tasks independently (like brushing teeth and picking out clothes).

It's easy to get so caught up in getting work done that you forget you decided to work from home to spend more time with your kids. Multitasking is great, but it can and should have its limits. Set aside some time devoted entirely to your kids without work distractions. I found out very quickly after bringing my daughter home that my toddler behaved much better when I set aside some time just for him while his little sister naps—I even think I get more done that way. It doesn't have to be some big Pinterest-inspired project every day -- just time. Make cookies, color a picture, run around with a laundry basket on your head. They probably won't remember what you did, but they will remember that you were there for them.

Do Set an Alarm

It's amazing how much my productivity level changes when I have a set wake up time. Even if I'm only waking up early enough to shower and eat before the little ones are awake, I still get more to-dos crossed of my list. It's tough to get out of bed when you don't actually have to be anywhere, but getting up early (and getting out of your pjs) has a big impact on productivity. Now, if you have a baby that gets up several times a night, setting an alarm may not be feasible just yet and that's okay—it will come.

Do Set a Work “Schedule”

Congratulations, you've just multiplied your level of unpredictability by two. But that doesn't mean you shouldn't have a work schedule. It may not be a schedule that goes by the clock, but you should have dedicated work times. For me, weekday nap time = work time, independent playtime = housework. Unless there's a large amount of bodily fluids on a surface it shouldn't be on, I don't do housework while the little ones are napping. My schedule doesn't always match up with a clock, but I still have one that matches my kids' days.

Don't Buy Into the “You Can Do It All” Lie

That mom that always seems to have it together on Facebook? It's not true. No one can do it all 100 percent of the time. Don't try to be super mom 24/7—get some help. Whether it's sending the kids to grandma's one day each week, locking yourself in a room for an hour in the evening while Dad watches the kids, or enlisting the older child to help with the housework, find a way to have some time each week to work without distractions. Don't forget to schedule some time for yourself, too—even if it's just riding in the car without children's music on the radio or twenty minutes of your latest Netflix series fixation.

Maybe you'll be lucky and life with two kids will be simpler than with one—but the chaos level often multiplies as families grow (you wouldn't work from home if you didn't love that chaos, though, right?). Learn to multitask, but set exceptions and be there for your kids without distractions sometimes, too. Set an alarm and a work routine. Embrace the fact that no one has it all together—life's more interesting that way, anyhow.