Teaching Your Child to be Coachable

Kids that can be coached are kids that learn. 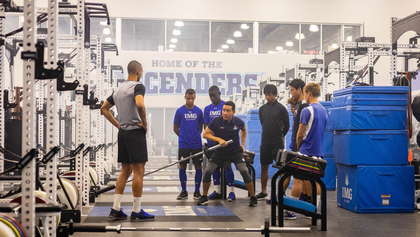 If you ask a coach at any level what one of their biggest challenges is, many of them will describe a similar situation: an athlete who isn’t open to coaching. When young athletes aren’t coachable, their tendencies can often translate to the future, and even to the workplace. While they may be interested in collegiate athletics, un-coachable high school athletes are not be an ideal prospect for college coaches. So what can you, as a parent, do to help your child be more coachable?

What is an un-coachable athlete?
Oftentimes, these athletes may feel as though they are never wrong and that they are being unfairly targeted by a coach. They may refuse to take any responsibility for their mistakes or actions and will often try to blame teammates, officials, opponents, or even playing conditions for their mistakes.

Avoid the instinct to take your child’s side against their coach.
When your child complains about their coach being too tough or yelling at them, the parental instinct is to side with your child and defend them. It’s important to remember that a coach’s job is to provide instruction, correction, and constructive criticism. If your child is doing something incorrectly in practice or during a game, the only way for them to improve is by being corrected. Unless the coach is being inappropriately tough or critical, remind your child why their coach is there and that they have their best interests at heart.

Suggest replacing resentment with gratitude.
Being coachable is more about attitude and less about athletic skill. Helping your child work on having a good attitude is critical. Rather than being upset with their coach for “yelling” at them, suggest to your child that they should be grateful that they have someone who wants them to improve and to become a better athlete. Over time, your child will learn to adjust their attitude from one of resentment to one of gratitude.

Emphasize the importance of respect.
Respect will be helpful to your child both through athletics as well as outside of the sports they play. Emphasize how important it is to be respectful towards figures of authority. As they mature, your child will need to understand how critical it is to be respectful towards you as a parent, their teachers, their coaches, and eventually their bosses in the workplace. An authority figure, or coach, who is respected is more likely to see positive behavior and performance from those they are coaching or instructing.

Consider sports camps and academies.
Sending your child to a sports camp or academy, such as IMG Academy, will put your child in an environment where they are surrounded by other athletes who are serious about their sport and committed to their improvement. They will see the example set for them by other focused athletes and will learn how to behave both while training and competing as well as during other daily activities.

Being coachable will benefit your child into adulthood.
You’ve probably seen some variation of this post on social media: “Un-coachable kids become unemployable adults.” And, it’s true. A child who is disrespectful, doesn’t take criticism well, and who isn’t willing to learn will take these traits with them into the workforce. Helping your child be a coachable athlete will benefit them even after they’ve stopped playing sports.

It takes a team effort to help your child understand why being coachable is important in athletics and in life. Your child must first see the importance, and then parents, coaches, teachers, and other authority figures play key roles throughout the process as well. By helping your child learn to be grateful, reminding them that their coach’s job is to help them improve, understanding and having a willingness to learn, and enrolling them in programs such as a sports camp or academy, you can assist your child in being both successful as an athlete and as a young adult.