6 Ways to Simplify Working at Home With a Newborn

From learning your baby's schedule and building flexibility into you own routine, to not being afraid of seeking out help, there are ways to optimize your work time while still being at home for your child. Here are 6 ways to make the most of your work-from-home experience with baby by your side. 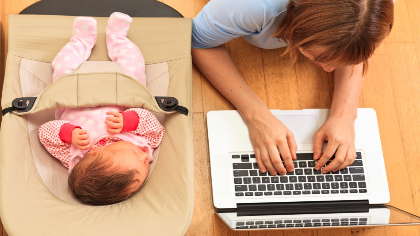 The very definition of being a work-at-home mom involves little ones underfoot, but what do you do when you're a mom to the very littlest--the newborn? Newborns don't exactly play by themselves, they don't understand "Just a minute," they have demanding feeding schedules, and they tend to make their needs known very loudly. The word challenge is even insufficient sometimes—I know because I'm writing this with an eight-week-old napping nearby. So how do you still manage to get work some work done? Here are six tips to work at home with a newborn.

Get to know your baby.

I never give out any baby advice anymore without adding some sort of disclaimer in a variation of “it worked for us.” Every child is different and what worked for one work-at-home mom may create utter chaos for you. Spend your maternity leave bonding and trying to figure out your newborn's likes and dislikes. Does she like to bounce, or prefer swinging? Does he like to be in a baby carrier, or scream every time he's in it? What does her hungry cry sound like versus her tired cry? Some work-at-home moms swear by baby carriers, while others get a lot done propping baby up with a pillow and typing during marathon nursing sessions. If your little one loves the swing, keep it by your workspace.

Work on a routine.

Most people by nature like routines—babies are no different. Now, newborns can't tell time, but can often become (somewhat) predictable. As you get to know your baby, identify their habits and use them to form a routine. Having a bit of predictability makes working at home much easier (as an added bonus, most baby sleep experts also suggest using a routine). Start with how often he or she eats and go from there. You can also wake him or her up at the same time every morning to help get a consistent routine. So if your baby eats every three hours followed by play and then a nap, you can start to predict generally when naps will fall.

For example, during the day my daughter likes to nurse every three hours. She'll play for about half an hour, and then she'll sleep until the next feeding time. During the evening, though, she's often fussier and cluster feeds for a few hours. I set me work schedule around her routine—I try to get up before she does in the morning, I work during her naps, and I try to keep the evening free unless I'm typing during one of those frequent nursing sessions.

Routines are great—but certainly not fail-proof. Teething, growth spurts...a lot of things can throw a newborn off their routine. Case in point: my daughter who usually sleeps wonderfully in her crib is now snuggled against me snoozing in her baby carrier after tummy trouble (I think) kept waking her up every ten minutes. It's okay to throw the routine out the window during a growth spurt—in another day or two, your little one will be back to normal. Don't become so fixated on getting work done at home that you forget the reason you wanted to work there in the first place! Some days your little one will need your undivided attention more than normal, and that's okay.

Just have a back-up plan. For example, try keeping Fridays free. That way when baby is fussier than normal (or was just too snuggly to put down) during the week, you have some time to get caught up. If you happen to still get everything done before then, spend the time doing extra marketing or goal planning or give yourself a much needed break and enjoy your own nap. Dear new mom, remember to forgive yourself—you just had a baby. I have an unwritten rule: If I'm up more than twice in the night, I turn my alarm off and don't get up to get work done before my kids are up. If I'm tired, I don't get nearly as much accomplished in that amount of time anyway.

If you're going to be flexible, you'll also need to prioritize. Make a list with the most important items at the top and cross them off as you go. That way, if you run into a growth spurt or a doctor's visit throws you off your game, there's still a good chance the “have tos” at least got crossed off.

I'll admit it—about half of my work is accomplished while my 2-year-old and newborn are being spoiled by their grandmas. Having undistracted time is essential to a lot of work-at-home businesses. It doesn't matter if it's a grandma or a responsible neighborhood teenager, an eight-hour-day or a one-hour break—if you plan to work more than a couple hours a week, you'll want to find help. If you can't afford to pay a babysitter, ask your spouse or significant other to have an hour or so of baby duty every evening. Ask family members if they'd like to help out. Or, trade babysitting with another mom. Even if that mom friend doesn't work, there's a good chance she'd be ecstatic to go grocery shopping by herself while you watch the kids. Then when it's her turn, you have that undistracted work time.

Anticipate the next phase.

I probably don't have to tell you that babies don't stay little long. And as they grow, their routines will change. They'll want to sleep less and play more—and your work routine will probably change, too. It's a good idea to at least acknowledge the change, if not plan for it. My littlest has such short play times, I don't work during them. My 2-year-old only takes one nap—I make sure to reserve some time to focus entirely on him, but still set aside some work time while he plays independently as well. As your baby grows, your work routine will change as well.

I sometimes find myself wishing for the luxury of working outside of the home surrounded by adult conversation with eight hours of absolutely no diaper changes. But then I remember why I quit my job when my first was three months old. It is possible to work at home with a newborn—not easy, but certainly possible. Get to know your baby, then work on getting a flexible routine in place for some sense of consistency. Prioritize and get the most important things done first. Don't be afraid to ask for help, and know that as your baby changes, your work schedule will change, too.