Working at Home With Kids

Working at home can be difficult for your children to understand. We discuss the best way to approach it. 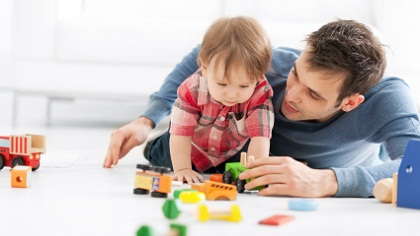 It was a Saturday afternoon, and I had work on my mind.

It didn't matter that it was a beautiful day or that I was currently "in charge" of my two kids-I had work to do. And as a male, I was asserting my right to employ tunnel vision and to forget everything around me so that I might finish this project.

"Dad, will you come and play with us?" my daughter asked. "Not now, honey," I told her. A short while later, my son tried. "Dad, are you done yet?" "No, please let me finish this," I said in a tone much sharper than I'd intended.

After a few more minutes of focused work, I heard my kids fighting in the other room. While I usually let them work out their own fights, this one sounded like it needed intervention. I broke things up and before long, I found myself in a wrestling match with both of them.

Their plan had worked! While they may not have consciously planned it, I was now firmly planted in their world. My tunnel vision had been shifted to a different focus: who would win the wrestling match. And I must admit that this was a whole lot more fun than the project I was working on.

Although I had been frustrated with my kids, it wasn't their fault. I had failed to make proper boundaries with them. I hadn't made it clear to them that I'd need a certain amount of time and space while I worked. And I hadn't told them what I expected of them.

As fathers and mothers increase their workload in this country, work and home obligations often come into conflict. We must often make the agonizing choice between spending "quality time" with our kids versus getting caught up with work. An excerpt from Robert Bly's book, "The Sibling Society" (1996) tells of the problems that fathers have in finding the time to have more "complete"lives:

"The patriarchal system's destruction of fatherhood continues in the United States today: In 1935, the average workingman had forty hours a week free, including Saturday and Sunday. By 1990, it was down to seventeen hours. The twenty-three lost hours of free time a week since 1935 are the
very hours in which the father could be a nurturing father, and find some center in himself, and the very hours in which the mother could feel she actually has a husband."

And I know in the future I'll be faced with the choice between work time or family time on many occasions. There's a lot of guilt on either side of this decision. But ten years from now nobody will care much about the project that I'm working on.

My kids, on the other hand, will grow up and think back on their childhood for the rest of their lives. The memories that we create together are eternal. Someday, these memories will pave the way for them to have memorable experiences with their own children.

The truth is that I still haven't finished that project that I was so focused on, and I can't say that it's too upsetting to me.

And I know my kids are just fine with it.