Pirate toils to be trustworthy

Say your son wants to earn extra money babysitting his little sister. He doesn't understand why you won't let him, even though last time she ended up eating chocolate and potato chips for dinner. Or perhaps your daughter can't comprehend why you won't lend her your favorite shirt anymore, even though it's torn or stained every time she returns it. 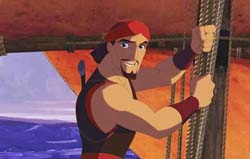 The new film Sinbad: Legend of the Seven Seas can help your kids understand how their past performances can make or break others' trust. After viewing this movie, do our family activity, "Tower of Trust," to bring the lesson to life.

The animated movie features Sinbad (Brad Pitt), a pirate who falls in love with his estranged friend's feisty fiancée (Catherine Zeta-Jones), while he tries to recover a magical book swindled by an evil goddess (Michelle Pfeiffer).

When Sinbad is framed for a crime he didn't commit, his childhood pal Proteus (Joseph Fiennes) puts his life on the line for him, even though he and Sinbad are still at odds. Proteus must trust that despite his pirating ways, Sinbad will return to save him. In the end, Sinbad must decide if he wants to become a man who tricks or is trustworthy.

Family Activity: Tower of Trust
Your family doesn't have to be a band of thieves to lose each other's trust from time to time. Together, play the Tower of Trust to learn how to build others' confidence in you.

Share!
Talk about what Sinbad did that made it tough for other characters to trust him. Then discuss what things your kids do that might make others distrust them. Is your daughter unable to keep a secret? Does your son return his friend's bicycle with a flat tire without offering to fix it?

Next, point out how Sinbad's actions at the end of the film transformed him into a dependable person. Then take turns talking about what actions in your kids' lives make them trustworthy. Maybe your daughter returned the extra change to the cashier who accidentally gave her too much. Perhaps your son faithfully finishes his chores each week before heading to the pool. Discuss how you build up someone's trust by being consistently reliable.

On one side of each cup, write one reason you can be trusted--from always showing

up on time to telling the truth. On the other side of each cup, write "Can Trust." Stack the cups upside down in a pyramid outside. As you do so, remind your kids that the more times you prove you are reliable, the more you built people's trust in you.

Next fill one water balloon. Write on one side "Can't Trust." On the other side write one action that would make you undependable, such as not following through on a promise. Standing a good distance from the cups, ask your children to throw a "Can't Trust" water balloon at the "Can Trust" pyramid.

If the balloon misses the pyramid, explain that once trust is built up, it can withstand a mistake or two. Fill another "Can't Trust" water balloon and ask your children to try again to hit the pyramid. When the tower finally tumbles, explain to your children that when trust is broken, it has to be rebuilt.

Your children will see that just like Sinbad, all it takes is one bad decision to throw their trustworthiness overboard.

E-mail your comments or ideas to [email protected].