Feisty old men not so ferocious under fur 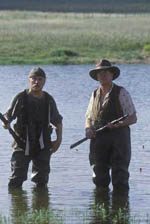 when you were young. It just doesn't come up in everyday conversation. Neither does the fact that your son has serious aspirations of becoming a circus clown, or that your daughter likes to share her sandwich with the new student.

The film Secondhand Lions can help spark silly and insightful conversations about not-so-talked-about topics. Then "paws" do to our activity, "Truth or Lion," to learn more about what makes each other tick.

Secondhand Lions features Hub (Robert Duvall) and Garth (Michael Caine), two curmudgeonly old brothers who are said to have millions of dollars stashed in their ramshackle ranch. Local rumor has it the men were crazy criminals who stole the cash, and that's why they won't let anyone on their property.

One day, an unknown great-nephew named Walter (Haley Joel Osment) gets dumped at their house by his flaky mom, who lies about why she can't take care of him for the summer. Walter, untrusting of adults, starts asking questions about the men's sketchy pasts. Through hearing swashbuckling tales of adventure and lost love, Walter sees a different side of his relatives and gives them new love and respect.

Family Activity: Truth or Lion
Go wild with our game "Truth or Lion" to discover how untapped topics can help your family make deeper connections with each other.

Share!
Take the time to talk about what Walter first thought about Uncle Hub and Uncle Garth when he came to stay at their house--he believed they were crazy for scaring strangers with shotguns and mean for making him sleep in a creepy attic. Then discuss the men's first impression of Walter. Why did they think he was so wimpy?

Share what you think are people's first impressions of you. When you meet someone, do you think you come across as shy or outgoing? Silly or serious?

Together, think about how stories of the uncles' adventurous pasts helped Walter to change his impression of the two men. How did learning about what's on the inside help Walter love his uncles, and help his uncles love him?

Think about times your family has opened up to one another. How has sharing life's little adventures and feelings helped your family grow closer?

The goal of this game is to get to know your family better by making them guess between fact and fiction. 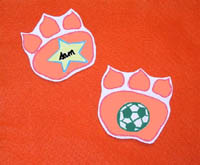 Cut out several lion-paw shapes from construction paper. Think of some fact your family might not know about you--such as you do a lucky dance before your soccer games, or you secretly practice signing autographs for when you're famous. Don't tell anyone what you came up with.

Then think of something that sounds like it could be a fact about you, but is not actually true. Don't tell anyone what you made up.

Have your child start by showing one side of the paw and telling either the fact or the fable. Then have him flip the paw and tell the other statement. You must decide which one is true. Take the paw and flip up the side you believe is real.

It's time for your child to reveal his answer. Take turns playing Truth or Lion until you've used all the paws. Just like Walter and the two old uncles, your family will grow closer trying to figure out which stories are true and which are tall "tails"!

E-mail your comments or ideas to [email protected].