6 Traits a Good Businesswoman Should Have 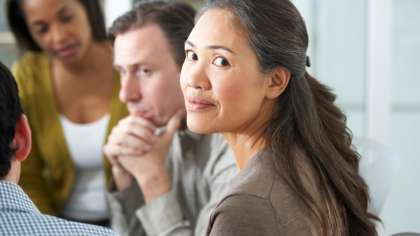 A good businesswoman possesses positive qualities that help her propel to success. Businesswomen are slowly gaining equal footing with their male counterparts. In many areas, the days when men used to dominate the world of big businesses and huge corporations are waning. The opinion of women (whether in high heels and red lipstick or more gender neutral attire) is sought more frequently; this occurs in boardrooms and local chambers of commerce.

A good example is Oprah Winfrey who was recently hailed as the "First Black Woman Millionaire". Recent statistics have shown that almost half, a whopping 47.7%, of American private companies are owned by women.

So what makes up the modern businesswoman?

A successful businesswoman has a clear vision. Her vision is ambitious but realistic and attainable. The drive to transform her vision to reality is strong and all her decisions are made towards achieving the company's mission and vision. She is always on the lookout to improve the company's standing (whether as an employee or business owner).

The modern woman entrepreneur has a healthy level of self confidence and believes in her ability and skills. Self doubt is part of being human, but a confident business woman is able to put these into proper perspective. She does not personalize mistakes or criticism but uses them instead as feedback and opportunities for improvement.

Aside from confidence in herself, she also values the opinion of others and seeks help from experts. She is confident in her ability to critically analyze other people's input. She actively listens to them. Running a business or heading a corporation involves taking risks. The successful businesswoman is willing to move forward, make bold decisions, explore new opportunities, take responsibility and able to analyze mistakes and poor decisions. She sees challenges as opportunities to learn, adapt and grow.

Entrepreneurs need to be bold enough to create new plans, rules and organizations when the status quo is no longer enough. She creates a modern twist to traditional ways in running a business by asking questions and recognizing the talent in other people. Smart businesswomen know that the key to business success is being able to collaborate with others and form win/win situations.

The successful businesswoman is willing to adapt to changes and learn new ways to thrive amidst the changes. A good example is the use of new technology. A good business woman will learn to be technologically competent and not dependent upon male counterparts or act in stereotypical ways.

Many businessmen are inclined to act in isolation. Businesswomen, however, are more incl