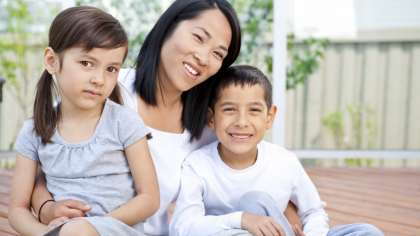 Raising mixed race children can be challenging, as the kids struggle to understand the cultures of both parents and consolidate that within their own identity. Knowing what these challenges will be can help you prepare to meet them so that both you and your children have an easier time coping. To give you some idea of what to expect, the following are some of the most common challenges of raising mixed race children.

Mixed race children often feel as though they are not accepted by either of their races, since they possess only half of each. They may feel prejudiced against from both sides of their heritage, accepted by neither - and unfortunately, this is often a legitimate feeling. You can't help how other people treat your children, but you can teach them to hold their heads high in the face of racial intolerance. Children should not feel like they are the ones at fault when they are prejudiced against. They should feel that those who are intolerant of different races are the ones with the problem, and that the problem is not mixed race itself.

Challenge 2: Confusion of Self Identity

The merging of two distinct cultures can create confusion as to which culture is "correct," and cause children to be torn over which culture they should identify with. The answer is that they should have an understanding of both, and should be free to choose what to call themselves, be it A, B, or A-B. Children should know that one culture is not better or worse than another, and should not be pressured into choosing. They should be able to take pride in both of their heritages, regardless of what they are.

As mentioned earlier, you can't help what other people say to your children. Potentially hurtful remarks like "What are you?" or "Is that your real mother?" can't be prevented, but you can teach your children how to respond. Children can brush off remarks like they aren't a big deal, giving short and polite answers ("Hawaiian-Thai," "Yes,") when asked. If you don't make a big deal about peoples' questions, your child will learn to chalk them up to simple curiosity (and truly, many questions are simply thoughtless and not intended to be malicious) and will answer them as such.

When people get pushy or rude, it's hard not to snipe back. However, by controlling your own reactions, you can teach your child dignity and self-respect. Most prejudiced people will back off if they don't get a reaction, or if the reaction they get is calm and polite.

Children need to know that those who are racially intolerant are the ones in the wrong, and will then be more easily able to brush off hurtful remarks. With a strong sense of self and the ability to take pride in their heritage, the challenges faced by parents of multi-racial children can be lessened.